An excellent article arguing that coercive policing isn’t the answer because it erodes trust in the public. It also persuasively argues that there is a lack of joined up thinking in the approach to crime reduction. Cuts to youth clubs, Sure Start and of course the police have all led to increased crime rates. 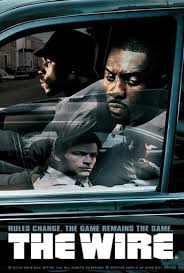 HBO’s drama series, ‘The Wire’ is so fantastic that Sociology degree students are studying it at the University of York and Harvard, and I for one am not surprised. Not only is the show incredibly entertaining and engrossing, it is also  the most well observed and multi dimensional pieces of drama I have seen.

Perhaps part of the reason for the shows brilliance is the leg work that journalist David Simon put into researching the plethora of issues to do with crime and policing; Simon, the show’s creator spent a year with the Baltimore police force (resulting in the book, Homicide’ and further time on ‘the corner’ with the drug pushers (resulting in the TV mini series, The Corner). Former police officer and school teacher, Ed Burns also contributed to the writing, thus providing further narrative authority.

Furthermore, in order to heighten the verisimilitude further, Simon chose to use alot of non professional actors in minor roles, slang is so prevalent sometimes it is hard to understand and the narrative does not often fall prey to stereotype or cliche. It is novelistic in structure and the multi layered narrative is refreshing for viewers who wish to invest a little bit of brain power when consuming media texts.

It is such a great show for sociology students, it investigates crime, poverty, policing, racism, drug use, education, corruption, political intrigue, social class, ethnicity, sexuality, the ethics of journalism…the list goes on…

It does take a few episodes to get to grips with, but I assure you, like Barack Obama (whose favourite character is said to be a gay stick up man called Omar) you will be well and truly hooked.