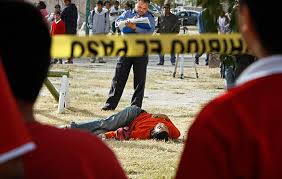 I watched a really shocking news documentary on Al Jazeera International  yesterday, it charted some of the extreme violence that is plaguing parts of Mexico such as Juarez (“one of the most dangerous places on earth”). http://english.aljazeera.net/InDepth/spotlight/mexicoonthebrink/default

The documentary was not scared to pull any punches, we saw a number of fresh corpses with blood spilling from gun shot wounds. A mother of one of the deceased boys was only metres away and her words (“I have a profound pain in my heart that will never leave me”) summed up the futility of the bloodshed and really encouraged the audience to personalise the deaths to some extent. Incredibly, it is claimed that 95% of murders are not investigated in Juarez.

Only around 2% result in convictions. According to borderlandbeat.com, murders in the city increased 40 percent in February 2011 over the same month the previous year: A total of 229 people in the city were executed in just one month, up from 163 in the same time period in 2010. The murder rate in the biggest city in the UK, London (7 million) pales in comparison to Juarez (1.5 million people ), in 2010, only 127 people were killed in London.

It is clear that this region is largely devoid of what Functionalist thinkers class as “social solidarity”, the police enjoy very little public confidence, traditional institutions such as medical clinics are closing down largely to escape the violent threats of criminal cartels who demand protection money and law abiding citizens are suffering from the high levels of corruption and  .

Durkheim’s ‘anomie’ could be applied readily to the region; clearly there is a discontinuity between cultural goals and the accepted methods available for reaching them. 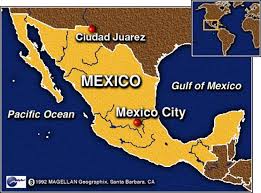 Perhaps because Juarez is so close to the USA, Robert Merton’s ‘American Dream’ thesis might be relevant; those who are resorting to violence are perhaps motivated by the material gains that they witness from the border, yet of course find it very hard to reach these goals, thus criminality is a very tempting option especially when the world’s largest drug market is just a stone’s throw away. Although, fom a contrasting school, a Left Realist concept, ‘relative deprivation’ can also be applied to this increase in criminality – perhaps many Mexicans living in Juarez are not motivated by outright poverty, rather they are motivated by a relative poverty to that of their neighbours…

Having personally spoken to a number of Mexicans, it appears that whilst the media perhaps does often sensationalise the violence and general criminality, the excess of crime is a reality and it is clear that many parts of the country are experiencing a massive turmoil. Some argue that a lot of the violence would decrease massively if the U.S legalised the selling of certain drugs, others argue for a more repressive police approach, whilst others argue that social welfare programmes such as the ones trialled in Columbia (http://www.csmonitor.com/World/Americas/2010/0804/Colombia-offers-clues-for-solution-to-Mexico-drug-war) are the best solutions.

What is clear, is that the violence seems to be getting worse rather than abating.