Hundreds of thousands of UK families will be affected by cuts of £12bn in the UK’s welfare budget announced by the chancellor. 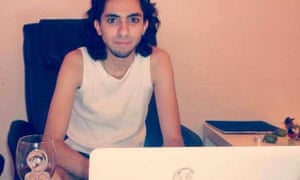 Raif Badawi was sentenced to 10 years in prison and 1,000 lashes for setting up a website that championed free speech in the autocratic kingdom. His blog, the Saudi Free Liberals Forum, was shut down after his arrest in 2012.(The Guardian)

This is a brilliant example of the tensions between Western ideas of secularisation, the advance of technology and conservative religious societies such as Saudi Arabia. It is a perfect example for Marxism because clearly the Saudis will not tolerate a critical analysis of their ‘religious’ approach to governance and thus supports the idea that religion is utilised by the hegemon to oppress the powerless majority. The example can also be used within the social change debate – clearly religion is being used an excuse to maintain the status quo and restrict any challenges.

Here are some quotes from the blog:

“Secularism respects everyone and does not offend anyone … Secularism … is the practical solution to lift countries (including ours) out of the third world and into the first world.”

“No religion at all has any connection to mankind’s civic progress. This is not a failing on the part of religion but rather that all religions represent a particular, precise spiritual relationship between the individual and the Creator. ..However, positive law is an unavoidable human and social need because traffic regulations, employment law and the codes governing the administration of State can hardly be derived from religion.”

Have a read of the following article (http://gu.com/p/45tjc), it is a very interesting insight into the fundamentalist ideology of Isis. Here is an extract if you are not keen to read a whole article!

Savagery is at the core of Isis ideology. But it is crucial not to play down that brutal acts have to be justified through sharia texts. Islamic fundamentalism is Isis’s ideology, so to speak, and every act has to be grounded in religious traditions. Muslim clerics who issue a “letter to al-Baghdadi” or a lengthy fatwa to delegitimise Isis miss the mark unless they understand the invigorating nature of this violent ideology. While Isis uses manuals such as Naji’s book, it references religious texts and stories. Muslim clerics should recognise that theoretical fatwas cannot sufficiently counter what I call “kinetic” sharia, consisting of stories and actions carried out by authoritative Muslim figures in early Islam, on which Isis relies heavily to justify its ideology. Statements such as “this hadith is weak” or “it is not permissible to kill prisoners of war” can be backed by religious texts, but how early Muslim leaders acted is similarly powerful, if not more persuasive.